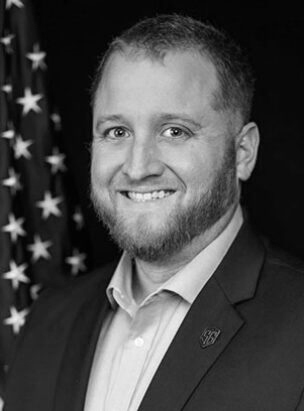 Mr. Rice is a U.S. Air Force veteran who served during the wars of Afghanistan and Iraq. While enlisted, he served as a Security Forces team leader, providing law enforcement and physical security to protect military installations and their assets. Mr. Rice served on a nuclear security response force, as a team leader, he worked Presidential Security Details for Air Force One and assisted in providing close personal protection for various military leaders during their visits.

Mr. Rice’s training includes a variety of advanced weapon skills, operational planning, physical security, threat vulnerability assessment and analysis, tactical maneuvers, and close-quarters combat among other skills. During the end of his tour, he was hand-selected to become an Air Force certified combat arms firearms instructor. While serving in this position he trained over 9,000+ armed forces personnel on various weapon systems in preparations for deployments to international zones and law enforcement for semi-annual qualifications and was awarded the Air Force Achievement Medal.

After Mr. Rice’s separation from the Air Force in 2012, he entered the private security industry, through employment by a security firm, worked counter-intelligence, and was assigned to personal protection details for executives, and various individuals to include an international band. He also conducted security audits, threat vulnerability assessments, and consulting services for large corporations in the South Texas Area.

In 2014, Mr. Rice was hired by the U.S. Department of Homeland Security, Homeland Security Investigations, where he gained valuable insight into the need for quality security services for the protection of our homeland to our own local communities. During his tenure with HSI, he was able to gain experience in a variety of investigations such as national security, counter-proliferation, human trafficking, fraud, and was even afforded the opportunity to work with the South Texas High Intensity Drug Trafficking Area (HIDTA) Task Force. In March 2017, Mr. Rice left the federal government to focus on the growth of SentrySix®.

Mr. Rice had over ten years of law enforcement and security experience, when he founded SentrySix® International, LLC, and has obtained his degree from the University of the Incarnate Word. Mr. Rice now serves as the Chairman of the Board of Directors, President, and Chief Executive Officer of the firm.